This has to have been my longest hiatus from the blog ever!

I didn’t even intended it to be that long at all and many things have happened, but most of them were work related so there wasn’t much I could write about. For one, overtime has been crazy since January, quite literally since the year started and only recently that has changed. All the while, I had been struggling with the 2nd part of EtS Chapter 2, so I started to draw the bonus chapter I had had in my head since 2017 at the beginning of February. It’s taken me 2 and a half months to write and draw 17 pages, but I am finally done!

All things considered, drawing all pages at once, as compared one by one each week, really changed nothing much. Only when I consider the fact that I couldn’t draw during my lunch breaks, it was actually faster…Still, overall, it was a page per week…

I did the cover, too, though. 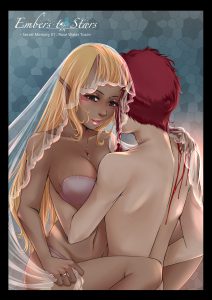 I am still so nervous about a lot of the things in this chapter. For one, I was nervous about Yome’s and Skye’s age, then I am still unsure what to do regarding the content warning (I left it as I did with the previous chapter), and of course, in my head it all makes sense. But how obvious are all the hints I have been giving throughout actually?

Also, just to be clear, I am not romanticising what Yome is doing. As noble as Skye’s stance may seem, it’s not right. Even Liora knows that. When she talks to him about how he needs to let go of the past, she reminds him that he “is free now”. She is referring to his relationship with Yome, which is also the reason, why she gets so upset. Skye still refers to Yome as his wife, despite all that he’s been through…

When I created Skye, with the Sunari family marks and the scar on his nose, I didn’t know why all of that was. It was more of a design choice. Then I decided his age and wanted to know what would make him such a young assassin. So I needed to break him. I wanted people to like him and I wanted to make him a good character.

(I wonder if I succeeded at all..)

His motivation and connection to the rebellion only developed when Liora became part of the cast, however. Even parts of the war that have been mentioned in the bonus chapter now only developed later and are now pretty important for the later story.

There are a few things that I know for sure at this point about Skye’s future, and some I am still debating with myself about, but maybe it’ll all change.

Either way, I mostly hope the chapter makes sense.

Now that I got it out of my system, I hope I do better at continuing with the next part of chapter 2.

It might not be important for people reading this, but Embers to Stars is now on Tapas.io. It was one of my goals to put the manga out there, so I am updating that, whenever I can!

Thank you for reading!!

I hope it’s not gonna take another 3 months for the next update. lol

I should probably have the full image of my two queens up by now! Drew this fir #PRIDE2020 Elya and Fraie from my Webcomic Embers to Stars #webcomic #LGBT #originalcharacter #gl #fantasy #drawing #digitalart pic.twitter.com/G4Dv…

@Manda_AMSBT @NightClassComic They are so cute! I love them. Can't wait for more!