It’s been 3 months again since the last entry, but at least I have an excuse this time.

After 10 years, I am finally done moving to a new apartment and while it has taken roughly 2 months in  total, I think it was as smooth as it could have been. I don’t want to rush, so it was stretched out over this much time. After all, I still had to work and I wanted to have time to draw, just to not lose my mind.

And as of today, I finally have internet and my desk setup is pretty much complete now.

New computer and chair and just overall bigger work space. This was what I had been looking forward to the most.

A proper setup for art and streaming!

The thing that also occupied me in the mean time, is an AU story about Skye and Liora I came up with a while back. 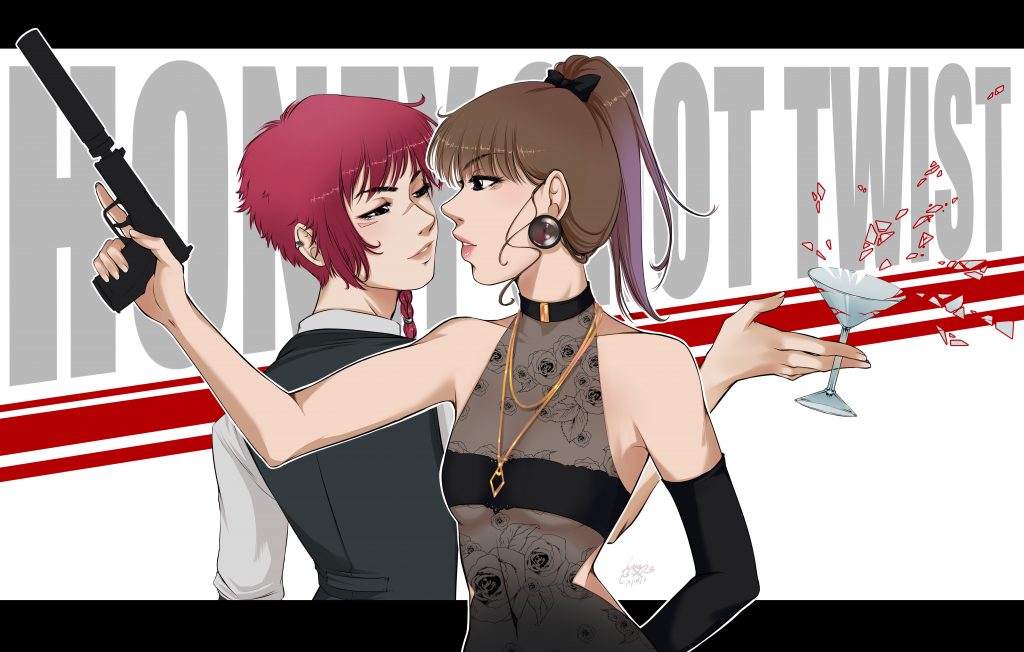 It’s a secret agent romance story, which I will be publishing on Tapas and then maybe later on Webtoon, also.

Mostly to get people to read it.

It’s just a silly little story, filled with secret agent tropes, because I’m a sucker for those and I felt these two would just be the perfect combination for that.

I will also create a separate site for the comic on Coffecat Arts, but I want to create a few more episodes and better visuals before making a full new site (even though that seems like fun).

Let’s see how things go from here on.

For one, I hope to get streaming again more!

So this was quicker than expected. I found a way to host the uncut episodes on my own server and they read pretty much like on Tapas. Thanks, bootstrap. For now only episodes 9 and 13, but I'm sure, more will follow. Uncut on honeyshottwist.com

New Honey Shot Twist episode is out! tapas.io/episode/232… I'll have to censor two episodes or it won't be available on the mobile app, so better look at those butts, while they are still there... 8D

Alright, just in case. I put the full image into After Hours on honeyshottwist.com #morningcuddles #webcomic pic.twitter.com/DyZw…

I might not be super good at it, but streaming is really fun. 🔥 Drawing or games, its just a bit more exciting. Thanks for always hanging out @notanactualsoap and @ZiggyBung